The day finally arrived. I have graduated officially as a bachelor in media may 31st, 2019. My studies began on august 12th 2014, and the long, five year road to graduation was filled with a massive mix of emotions that it is hard to describe within a single sentence.

The official effect of my graduation took hold when I woke up on Monday of last week (27th of may 2019), and a sudden realization hit me:

I feel great. I don’t feel encumbered by thoughts of essays that must be returned, credits to calculate, possible late assignments to slog through. I felt like basically a massive, locked section of my brain was magically opened to be filled with new information.

Now, was that a good realization from me? Did this mean that I have had some kind of insane tabula rasa effect happen to me some sunny Finnish morning?

So, as it usually goes, I simply thought. I thought of how I finally got to this situation, of all the possible downs and ups, dashes and slow strides.

I finally thought of what happens next.

I still remember the day when we did our entrance exams. I was in my military fatigues (I had a mandatory service back then) and I was in a severe infection that pushed my fever to a whopping 40°c. Yes, I basically should have been hospitalized. But something told me “go, do it. And get it done right.” Aside from my mother that gave me also a great push, I went and did my two day entrance exam. A dear friend let me sleep at their place for the night, and apparently I coughed and coughed all night long, even though all I remember is closing my eyes one evening and opening them the next morning.

After months of waiting, the post arrived. “You have been selected to Tampere University of Applied Sciences.” I called my mother, nearly yelled to her about the good news with pure joy and I counted the days until I finally could get into a fairly prestigious film school in Finland.

The very first day, I arrive nearly 45 minutes earlier than intended, because I simply was too excited to stay home and wait for the right timing to go and arrive to school. So there I was, waiting. Back then our school was situated in a form of loft style old factory, with red brick walls, industrial designs and overall a feeling of being in an actual creative environment filled with many, many different inspiring hallways, classrooms, studios… 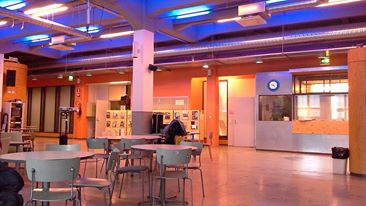 That, didn’t last too long though. By the end of our first year, we were informed that we were to move to a new location north-west from the lofty building. It was a major change, and i’d argue that the shift contributed to the general morale of our studies. We moved to a branch of the same building as YLE, the national television station of Finland. We were blessed with a lot of co-working opportunities with them, along with direct contact to gain more information on how everything worked in the field of Finnish media. I’ve met a lot of professionals, ranging from amazing producers and sound engineers to a down right awe-striking, very wise studio director (you know who you are, if you read this.)

Of course, along with the practical learning we did do theory which led to many, many hurdles. At a point I even admit, I thought of quitting my school. You see, I am diagnosed with attention deficit hyperactivity disorder. And I saw myself that the only way for me to get over it, is to learn normally along with others. It was, to say the least, one of the greatest personal challenges I ever had in my life. I had such difficulty to sticking to some deadlines in terms of returning written assignments, and most if not almost all the time an assignment was due I returned it at the last possible second without taking much into account specified statements on how these assignments were to be done.

That, was my mental trial by fire. By the end of it, it cumulated to what I call my “months of apathy”. I just lost total interest in everything. Anything that felt somehow exciting and inspiring just became a chore. The thought of leaving my 34.5m2 apartment felt at times like a massive hurdle, and doing basic workouts were like a full on exotic thing for me. It was all just a massive, gray time that I forgot completely what I even did. A full on time of around 3-5 months where some type of extreme burnout just completely made me uninterested about everything.

I did do something though. I found an amazing first internship. That internship at Uusi Iloinen Teatteri for a few months at the start of 2017 re-invigorated me to finally push myself to finish my studies.

Though, those final two years were still extremely arduous, it was by all means some of the best time I ever had with very professional people. Along the way, from February to May 2018 I did an internship at the now closed Kulttuurikeskus Gloria. That also contributed majorly to how I saw working in media as. All the time during our studies we were warned, tested and trained to make sure that very, very intense situations could be handled. And I just felt like I reveled in the hecticness.

It was like a constant state of flow. One problem meant another to solve, one oops meant not to do it again etc etc. And along the way, professionals from the field taught me valuable life lessons and career advice that I can never thank them enough.

Then, my thesis. I did my thesis on podcasting, the full title being Collecting Information and Projecting it in the Form of a Podcast. That thesis was the catalyst to how I perceived, worked, decided and philosophised working as a sound engineer. I learned a lot on how a podcast can be made, on how a podcast can be published, on different people to interview, collecting information, collecting numerical data… the thesis itself completely shifted how I saw a career being forged in sound engineering.

Not only that, but along with all of these many, many storms of varying motivational levels, my family has been there with me, always pushing me forwards with an iron will, believing in my success. For that, my gratitude to my mother, sister, step-father and brothers is infinite. Especially my sister, as her pushing me to this goal was a great motivator and showed me that there indeed was a meaning to my studies in the end.

That all finally culminated on may 31st, 2019. It was a very weird day. An early morning, a travel by bus to Tampere from Helsinki, and I remember the strongest simply how.. light it all felt. It was like a massive mist of memories just shifted through me, like a kind, soft, melancholic wave that simply caressed through me as if to finally say “you did great. You arrived at this point, you have only one direction.”

I knew, that after this, even though hundreds of thousands of Finnish people also are alumni, I was not the same man I was the 30th. I felt like I finally achieved something, that men from my now deceased biological father’s side never achieved.

I graduated as a bachelor in media.

Creator and owner of Frequency Café. I write on music, movies and other forms of media. View all posts by Sebastian